This year I will tell my story of the JOTA 2017:
Sadly I lost all my photos due to a corrupt SD card. So no pictures this year.

Monday evening, when I finished my work in Delft, I rushed back home, eating my diner really quick and back on the road to Rijen (small village next to Breda, south of Holland). To bring my antenna’s and cables, so that the scouts can start with erecting a 16 meter mast with in the top my Diamond X50 and a 25 meter HF longwire. Which will be installed as sloper. While I was there, why not helping with the JOTI? Together with a big team, we placed, connected and installed 1 server, 5 switches, 30 computers (desktop, screen, keyboard, mouse, headset) and many kilometers of network/power and other cables. See the timelapse.

(the man with the blue/light blue striped shirt, that’s me 😉 )

With my stuff (radio, meters, tools, more cables, sleeping bag, clothes etc.) I left my home and drove back to Rijen for a long weekend of short nights and long days, but with so much fun!!

When I got there nearly everything (for the JOTI) was ready. Also, my antenna’s were raised high above the treeline, NICE!!!

I less then an hour, I installed my radio and connected to the antenna’s (and check the SWR, again perfect 1:1). I made some short contacts (QSOs) with some local amateurs. But also on 10m with an amateur who live in Maassluis, that’s some 20km from my house, but now its nearly 80km.

I was asked to check the 27mc (11mtr) radio’s and antennas for their evening game (drive in the area with a 27mc radio on board answering questions). When everything was sorted and checked it was already 18h. Dinnertime. With 12 man (and women) we eat our dinner. But we haven´t much time. Because at 19 o’clock the first cars would arrive and t 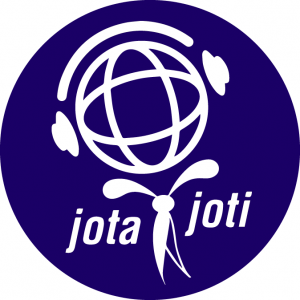 hen it was all hands on deck. I started to build in all the radios (6 in total) and antennas (magnet mount) and checking and adjusting their SWR. Every car went OK, except 1. That was a car with a glass roof. I didn’t get the SWR in a reasonable position. After 20min I stopped tweaking and searching for the best SWR. I went inside and grepped another antenna (different brand and model, with a different adjusting mechanism) and that was a golden choice!  In less then 3 minutes I had this antenna tuned and they were also ready.

When every car was ready their game could start at eight o’clock, and finally a quite moment for me. Knowing that when all the car came back in, I had to remove everything and start prepping for the next day. In the meanwhile, I made some QSO’s as PH7GIS/J. But soon my radio would be used for the game (nicer audio and reception, I limited the power to 4 watt, which is the legal limit for 27mc (FM) in the Netherlands). And with an endfed hanging from the trees, the sending range was good.

As last 3 years, I stayed the night in their clubhouse, I set my alarm to 7:30. After a short night, I woke up and getting ready for the (busy) day.

When I was set I helped out the others with the 27mc backpacks of some games in the woods.

My first group of children came at 9 o’clock. I tell them what I was doing there and what the hobby is about. A lot of questions that followed.
I had arranged some contacts with neighboring groups. So we were sure to get a contact. Sadly this didn’t turn out as planned. Poor propagation was to blame for this. Luckily a managed to get a QSO for these kids.
This group went O.K. The next group will follow shortly after.

After 9 groups of scouts (with a total of approx. 50-60 children) I made “just” 12 contacts. It was very busy on 2m when I gave a shout on 70cm it was deadly quiet, no response. So I QSY (change frequency) to 70cm a lot.
HF was a disaster, no returning calls. There was a moment when I thought that maybe something was wrong with my setup, But tuning to 14.070MHz for some PSK contacts, it worked fine, no problem what so ever.

The evening was the same as last night, only different cars. I prepared a lot, and that paid off, within 30 minutes all 6 cars were ready for the game.

In the meanwhile we wait till everybody has arrived for the game, I made some (HF, 80 and 40m) PSK qso’s with scouts in  England, Spain, and Ukraine.

And at half past nine the game started, again my radio would be used for the game. The game ended somewhere around 23 o’clock after that only a party was planned.

Many woke up well after noon 😉

When everybody was “awake”, we started with cleaning up and storing away everything we used. Also dismantling my radio station and getting all the antennas from the roof (and the trees)

When everything was packed and cleaned up, I drove back home.

I took the day off from work (experience for previous editions 😉 )

I really enjoyed it, It seems that I enjoy it, even more, each year.

Scouting Rijen, thanks and see you next year!